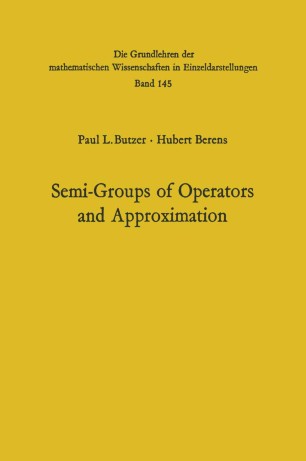 Semi-Groups of Operators and Approximation

In recent years important progress has been made in the study of semi-groups of operators from the viewpoint of approximation theory. These advances have primarily been achieved by introducing the theory of intermediate spaces. The applications of the theory not only permit integration of a series of diverse questions from many domains of mathematical analysis but also lead to significant new results on classical approximation theory, on the initial and boundary behavior of solutions of partial differential equations, and on the theory of singular integrals. The aim of this book is to present a systematic treatment of semi­ groups of bounded linear operators on Banach spaces and their connec­ tions with approximation theoretical questions in a more classical setting as well as within the setting of the theory of intermediate spaces. However, no attempt is made to present an exhaustive account of the theory of semi-groups of operators per se, which is the central theme of the monumental treatise by HILLE and PHILLIPS (1957). Neither has it been attempted to give an account of the theory of approximation as such. A number of excellent books on various aspects of the latter theory has appeared in recent years, so for example CHENEY (1966), DAVIS (1963), LORENTZ (1966), MEINARDUS (1964), RICE (1964), SARD (1963). By contrast, the present book is primarily concerned with those aspects of semi-group theory that are connected in some way or other with approximation.