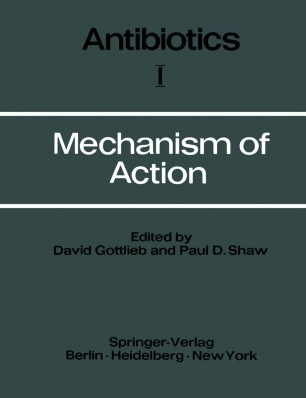 The idea for publishing these books on the mechanism of action and on the biosynthesis of antibiotics was born of frustration in our attempts to keep abreast of the literature. Gone were the years when we were able to keep a biblio­ graphy on antibiotics and feel confident that we could find everything that was being published on this subject. These fields of investigation were moving for­ ward so rapidly and were encompassing so wide a range of specialized areas in microbiology and chemistry that it was almost impossible to keep abreast of developments. In our naivete and enthusiasm, however, we were unaware that we were toying with an idea that might enmesh us, that we were creating an entity with a life of its own, that we were letting loose a Golom who instead of being our servant would be our master. That we set up ideals for these books is obvious; they would be current guides to developments and information in the areas of mechanism of action and bio­ synthesis of antibiotics. For almost every subject, we wished to enlist the aid of an investigator who himself had played a part in determining the nature of the phenomena that were being discussed. One concept for the books was that they include only antibiotics for which a definitive, well-documented mechanism of action or biosynthetic pathway was known.