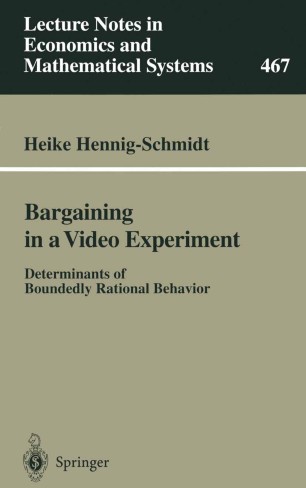 Bargaining in a Video Experiment

Bilateral bargaining situations are of great importance in reality. Traditional microeconomics, however, make cognitive and motivational assumptions of subjects` full rationality that are revealed as being unrealistic by a growing number of experimental investigations. The present book adds an important contribution to the understanding of principles of boundedly rational behavior by directly observing groups of subjects in a decision situation and videotaping their discussions. A very important result of the book is that the behavior of subjects is guided by aspirations regarding the final outcome. The levels of aspirations are influenced by prominence and different forms of the equity principle resulting in several fairness norms as to the allocation of the amount of money to be divided. Another important feature of the book stems from the analysis of break off discussions and enables a motivational explanation of the emergence of breakdowns in bargaining.