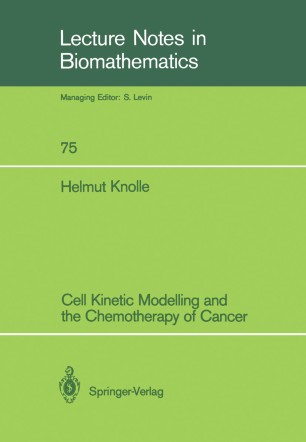 Cell Kinetic Modelling and the Chemotherapy of Cancer

During the last 30 years, many chemical compounds that are active against tumors have been discovered or developed. At the same time, new methods of testing drugs for cancer therapy have evolved. nefore 1964, drug testing on animal tumors was directed to observation of the incfease in life span of the host after a single dose. A new approach, in which the effects of multiple doses on the proliferation kinetics of the tumor in vivo as well as of cell lines in vitro are investigated, has been outlined by Skipper and his co-workers in a series of papers beginning in 1964 (Skipper, Schabel and Wilcox, 1964 and 1965). They also investigated the influence of the time schedule in the treatment of experimental tumors. Since the publication of those studies, cell population kinetics cannot be left out of any discussion of the rational basis of chemotherapy. When clinical oncologists began to apply cell kinetic concepts in practice about 15 years ago, the theoretical basis was still very poor, in spite of Skipper's progress, and the lack of re­ levant cytokinetic and pharmacologic data was apparent. Subsequently, much theoretical work has been done and many cell kinetic models have been elaborated (for a review see Eisen, 1977).