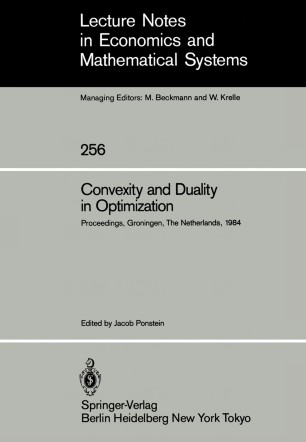 Convexity and Duality in Optimization

Proceedings of the Symposium on Convexity and Duality in Optimization Held at the University of Groningen, The Netherlands June 22, 1984

The analysis and optimization of convex functions have re­ ceived a great deal of attention during the last two decades. If we had to choose two key-words from these developments, we would retain the concept of ~ubdi66~e~ and the duality theo~y. As it usual in the development of mathematical theories, people had since tried to extend the known defi­ nitions and properties to new classes of functions, including the convex ones. For what concerns the generalization of the notion of subdifferential, tremendous achievements have been carried out in the past decade and any rna·· thematician who is faced with a nondifferentiable nonconvex function has now a panoply of generalized subdifferentials or derivatives at his disposal. A lot remains to be done in this area, especially concerning vecto~-valued functions ; however we think the golden age for these researches is behind us. Duality theory has also fascinated many mathematicians since the underlying mathematical framework has been laid down in the context of Convex Analysis. The various duality schemes which have emerged in the re­ cent years, despite of their mathematical elegance, have not always proved as powerful as expected.