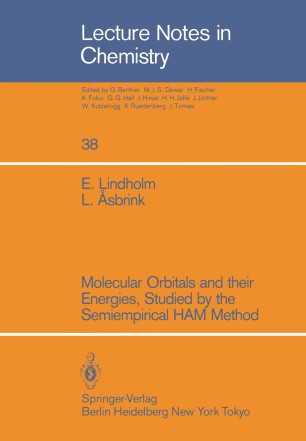 Molecular Orbitals and their Energies, Studied by the Semiempirical HAM Method

This treatment of molecular and atomic physics is primarily meant as a textbook. It is intended for both chemists and physicists. ·It can be read without much knowledge of quantum mechanics or mathematics, since all such details are explained-. It has developed through a series of lectures at the Royal Institute of Technology. The content is to about 50 % theoretical and to 50 % experimental. The reason why the authors, who are experimentalists, went into theory is the following. When we during the beginning of the 1970's measured photo­ electron spectra of organic molecules, it appeared to be impossible to understand them by use of available theoretical calculations. To handle hydrocarbons we ( together with C. Fridh ) constructed in 1972 a purely empirical procedure, SPINDO [1] which has proved to be useful, but the extension to molecules with hetero­ atoms appeared to be difficult. One of us ( L.A.) proposed then another purely ~~E!E!~~! EE2~~~~E~ ( Hydrogenic Atoms in Molecules, HAM/1, unpublished), in which the Fock matrix elements f5..y were parametrized using Slater's shielding concept. The self-repulsion was compensated by a term "-1". The §~~2~~_~ff2E~, HAM/2 [2] , started from the total energy E:. of the molecule. The atomic parts of L used the Slater shielding constants, and the bond parts of E. were taken from SPINDO. The Fock matrix elements Fpv were then obtained from E in a conventional way.