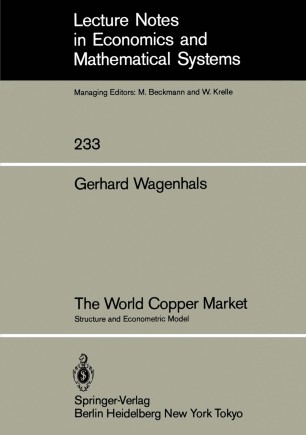 1.1 The Importance of Copper Copper, the red metal, has been known in histor~ for thousands of ~ears. It ma~ have been mankind's first metal (Joralemon= 1973). And still, probabl~ more than one hundred decades after native copper was used for the first time (Muhl~ (1973: 171», toda~, copper is a ver~ important commodit~: 1. Onl~ aluminum (first in 1963) surpasses refined copper in terms of the total 1 world's mine production and consumption. It outpaces zinc, lead, nickel and tin • 2. Refined copper is one of the most important export products of the developing countries. In 1975, refined copper ranked 8th in the developing countries' export values in general, it was 6th among their non-fuel exports, and their most important export 2 commodit~ among the non-ferrous metals • 3. Man~ small and medium sized industrialized countries depend heavil~ on copper imports. For example, West German~'s share in world mine production has alwa~s been smaller than 0.1 per cent. In the last few decades, however, the Federal Republic's consumption share has amounted to some 8 i. in 1982. 4. Copper is of utmost importance for the export earnings of several countries.