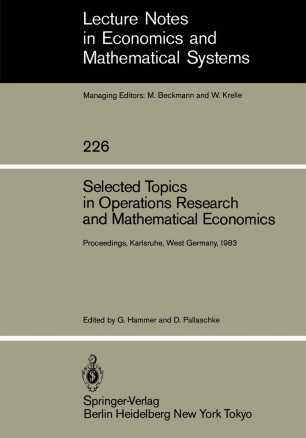 Proceedings of the 8th Symposium on Operations Research, Held at the University of Karlsruhe, West Germany August 22–25, 1983

Let eRN be the usual vector-space of real N-uples with the usual inner product denoted by (. ,. ). In this paper P is a nonempty compact polyhedral set of mN, f is a real-valued function defined on (RN continuously differentiable and fP is the line- ly constrained minimization problem stated as : min (f(x) I x € P) • For computing stationary points of problemtj) we propose a method which attempts to operate within the linear-simplex method structure. This method then appears as a same type of method as the convex-simplex method of Zangwill [6]. It is however, different and has the advantage of being less technical with regards to the Zangwill method. It has also a simple geometrical interpretation which makes it more under­ standable and more open to other improvements. Also in the case where f is convex an implementable line-search is proposed which is not the case in the Zangwill method. Moreover, if f(x) = (c,x) this method will coincide with the simplex method (this is also true in the case of the convex simplex method) i if f(x) = I Ixl 12 it will be almost the same as the algorithm given by Bazaraa, Goode, Rardin [2].