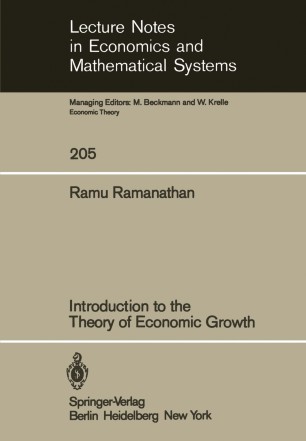 Introduction to the Theory of Economic Growth

This book is an outgrowth of years of teaching and doing re­ search at the University of California, San Diego (UCSD), in the area of economic growth. Although there have been several books on this topic published in the last eight years, I have been dis­ satisfied with them for several reasons. First, books such as those by Wan, Burmeister and Dobell are uneven in their technical difficulty and, while they are excellent, are apparently difficult for first year graduate students and advanced undergraduates. Solow's expository book, on the other hand, is at the other ex­ treme. Furthermore, many of the books seem to be aimed at the authors' peers rather than the students. My primary objective in writing this book is to bridge this gap and to pitch, very appro­ priately I hope, at the level of a typical student enrolled in a beginning course in growth theory. Secondly, almost all the growth models in the literature can be recast in a single analyti­ cal framework. Although the various authors have not written so as to conform to any particular pattern, it -is the function of a textbook writer to identify such a pattern, if it exists, and pre­ sent the theory in that framework. Many authors make implicit as­ sumptions about their models which are either never specified or sometimes specified in footnotes.