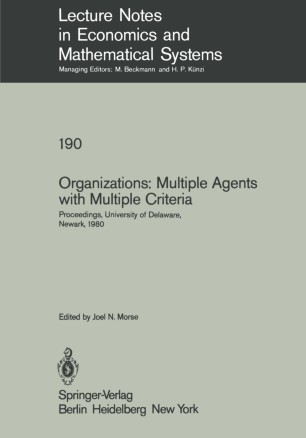 The Fourth International MCDM Conference follows a tradition that began with an exploratory gathering at the University of South Carolina in 1973. The First International Conference was held in Jouy-en-Josas in 1975. The second and third were held in Buffalo (1977) and KOnigswinter (1979). We are grateful to the Office of Naval Research for years of advice and funding, and to Springer-Verlag for providing a widely dispersed series of proceedings volumes. In the case of the Delaware Conference we gratefully acknowledge new support from the corporate sector, coordinated by the University of Delaware's Development Office. Now that I have attended to the formal recognitions, I wish to place my recollection of the human side of the conference into the record. This is justi­ fiable because multiple criteria problem solving has been nurtured by a close-knit group of people whose interactions are not fully captured by the standard journal format. This was the conference in which an animated discussion between Dave,Bell and Paul Schoemaker caused Mathilde Stephenson to stand up and say, "Don't stop it; this is the best part of the conference. " Another sort of moment occurred when Lucas Pun was asked to explain a certain Chinese character in one of his transpar­ encies. He replied, "No alcohol allowed. " From Erick Duesing, speaking with an historical perspective, we had the insight that multiple criteria methods lan­ guished because "McCarthyism had made planning suspect.