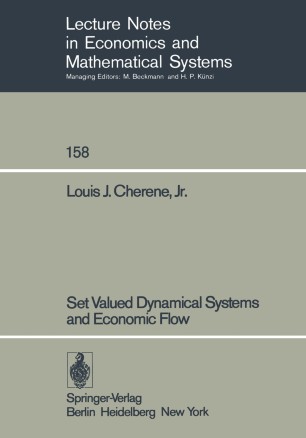 The purpose of this monograph is to illuminate the central issues of dynamic analysis applied to economic models, using a generally accepted language of the study of dynamical systems at a level of sophistication likely to be understood by an economist versed in elementary topology. Whether an economic system is governed by a first order difference equation or several simultaneous multivalued partial differential equations, its solution is a flow that determines the state of the system given an initial condition and elapsed time. Thus the flow of a system is the central concept from which the theory here expounded develops. The explicit examples and applications herein are discrete time models, but the theoretical re­ sults hold for continuous time models as well. The supplementary bibliography in­ cludes several papers at the frontier of set-valued dynamics which may be viewed using the basic concepts defined in this text; all of these works involve demon­ strating that (almost) all possible trajectories that a system may follow converge to some set of equilibria. The application of set valued dynamical analysis to economic models is pro~ vided to engender in the reader an appreciation for the relevance of these con­ cepts to economic theory.