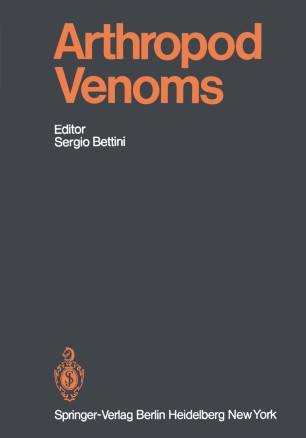 Arthropod venoms have received much attention and have played an important role in folklore and medicine since ancient times. Scorpion envenomation, "tarant­ ism," bee and wasp stings are among those subjects about which most has been speculated and written in the past. In the last 50 years or so, a great number of scientific papers have been devoted to arthropod venoms, but only a few volumes have been designed to collect this rapidly increasing material, and these are not recent. Of late, the chemistry and mode of action of several arthropod venoms have been thoroughly studied, and some of these substances will probably be used as pharmacological tools and also as therapeutic agents. The aim of the present volume is to collect in manual form new information as well as the old notions on arthropod venoms. Even though it was our intention to present a volume on arthropod venoms, and not on venomous arthropods, inevitably we were forced to include information on venom-producing organisms as well. We assumed, in fact, that those scientists for whom the present manual is primarily intended (biochemists, particularly com­ parative biochemists, and pharmacologists) should be familiar with the biologic elements concerning the venom-producing species; which should show them how important it is to operate in close collaboration with biologists specialized in venomous arthropod systematics and biology.