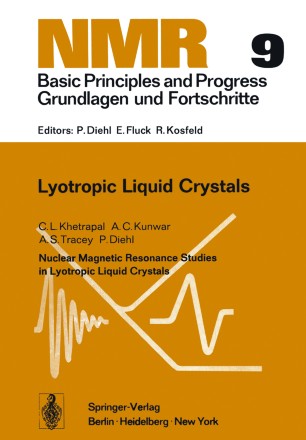 1. Lyotropic Liquid Crystals The class of compounds known as thermotropic liquid crystals has been widely utilized in basic research and industry during recent years. The properties of these materials are such that on heating from the solid to the isotropic liquid state, phase transitions occur with the formation of one or more intermediate anisotropic liquids. The unique and sometimes startling properties of these liquid crystals are the properties of pure compounds. However, there exists a second class of substances known as lyotropic liquid crystals which obtain their anisotropic properties from the mixing of two or more components. One of the components is amphiphilic, containing a polar head group (generally ionic or zwitterionic) attached to one or more long-chain hydrocarbons; the second component is usually water. Lyotropic liquid crystals occur abundantly in nature, particularly in all living systems. As a consequence, a bright future seems assured for studies on such systems. Even now, many of the properties of these systems are poorly understood. It is the purpose of this review to consolidate the results obtained from nuclear magnetic resonance studies of such systems and to provide a coherent picture of the field. Probably the most familiar example of a lyotropic liquid crystal is soap in water. A common soap is sodium dodecylsulphate where an ionic group (sulphate) is attached to a hydrocarbon chain containing twelve carbons.