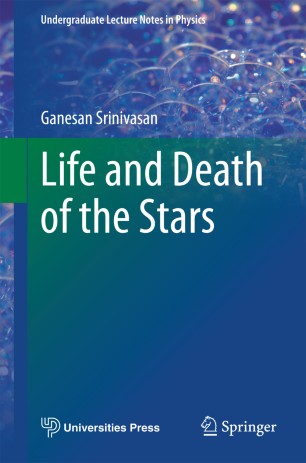 Life and Death of the Stars

This volume is devoted to one of the fascinating things about stars: how they evolve as they age. This evolution is different for stars of different masses. How stars end their lives when their supply of energy is exhausted also depends on their masses. Interestingly, astronomers conjectured about the ultimate fate of the stars even before the details of their evolution became clear. Part I of this book gives an account of the remarkable predictions made during the 1920s and 1930s concerning the ultimate fate of stars. Since much of this development hinged on quantum physics that emerged during this time, a detailed introduction to the relevant physics is included in the book. Part II is a summary of the life history of stars. This discussion is divided into three parts: low-mass stars, like our Sun, intermediate-mass stars, and massive stars. Many of the concepts of contemporary astrophysics were built on the foundation erected by Subrahmanyan Chandrasekhar in the 1930s. This book, written during his birth centenary, includes a brief biographical sketch of the brilliant scientist, which readers will find fascinating.

Reading this book will get young students excited about the presently unfolding revolution in astronomy and the challenges that await them in the world of physics, engineering and technology. General readers will also find the book appealing for its highly accessible narrative of the physics of stars.

This book is a companion volume of “What are the Stars?” by the same author.

"I know of no other book on the evolution of stars of a similar scope and breadth that is so accessible for undergraduate students."

Winner of the Spinoza and Descartes PrizesUniversity of Amsterdam, The Netherlands

Dr. G. Srinivasan began his career as a solid state physicist and later switched to astrophysics. After his PhD at the University of Chicago, he worked at the IBM Research Laboratory, Zurich, Switzerland, Chalmers University of Technology, Goteborg, Sweden, Cavendish Laboratory, University of Cambridge and Raman Research Institute, Bangalore. He is a Past President of the Astronomical Society of India as well as the Division of Space and High Energy Astrophysics of the International Astronomical Union. He is a Fellow of the Indian Academy of Sciences and a former Jawaharlal Nehru Fellow.