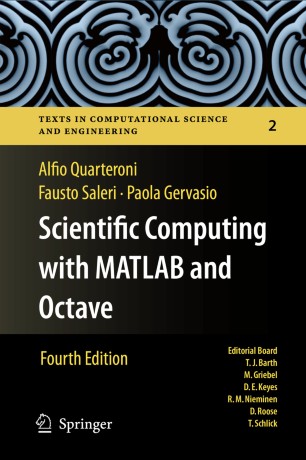 Scientific Computing with MATLAB and Octave

Part of the Texts in Computational Science and Engineering book series (TCSE, volume 2)

This textbook is an introduction to Scientific Computing, in which several numerical methods for the computer-based solution of certain classes of mathematical problems are illustrated. The authors show how to compute the zeros, the extrema, and the integrals of continuous functions, solve linear systems, approximate functions using polynomials and construct accurate approximations for the solution of ordinary and partial differential equations. To make the format concrete and appealing, the programming environments Matlab and Octave are adopted as faithful companions. The book contains the solutions to several problems posed in exercises and examples, often originating from important applications. At the end of each chapter, a specific section is devoted to subjects which were not addressed in the book and contains bibliographical references for a more comprehensive treatment of the material.

".... This carefully written textbook, the third English edition, contains substantial new developments on the numerical solution of differential equations. It is typeset in a two-color design and is written in a style suited for readers who have mathematics, natural sciences, computer sciences or economics as a background and who are interested in a well-organized introduction to the subject." Roberto Plato (Siegen), Zentralblatt MATH 1205.65002

Alfio Quarteroni is Professor and Director of MATHICSE at EPFL, Lausanne (Switzerland), and Professor and Director of MOX at the Politecnico di Milano (Italy). Author of 20 books (mostly published with Springer) and of more than 200 papers, he is actually one of the strongest and reliable mathematicians in the world in the field of Modelling and SC. Fausto Saleri was Professor of Numerical Analysis at Politecnico di Milano (Italy) until 2007. Author of 11 books published with Springer, he worked on the approximation of partial differential equations, giving important contributions to the study of shallow water equations and to the development of scientific software libraries for finite elements. Paola Gervasio is Associate Professor of Numerical Analysis at University of Brescia (Italy) since 2005. Her research work focuses on the approximation of partial differential equations by spectral methods and domain decomposition techniques.