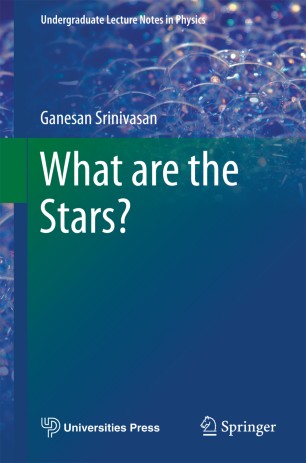 What are the Stars?

The outstanding question in astronomy at the turn of the twentieth century was: What are the stars and why are they as they are? In this volume, the story of how the answer to this fundamental question was unravelled is narrated in an informal style, with emphasis on the underlying physics. Although the foundations of astrophysics were laid down by 1870, and the edifice was sufficiently built up by 1920, the definitive proof of many of the prescient conjectures made in the 1920s and 1930s came to be established less than ten years ago. This book discusses these recent developments in the context of discussing the nature of the stars, their stability and the source of the energy they radiate.

Reading this book will get young students excited about the presently unfolding revolution in astronomy and the challenges that await them in the world of physics, engineering and technology. General readers will also find the book appealing for its highly accessible narrative of the physics of stars.

“... The readers will find Dr Srinivasan, an internationally acclaimed leader in this enterprise, to be a clear and enthusiastic guide to the wonders and mysteries of the cosmos.”

“I know of no comparable book in the present-day literature that so successfully conveys the excitement of the development of ideas pertaining to the physics of stars, including the newest discoveries, and at the same time  explains the fundamentals so well.”

Winner of the Spinoza and Descartes Prizes

University of Amsterdam, The Netherlands

Dr. G. Srinivasan began his career as a solid state physicist and later switched to astrophysics. After his PhD at the University of Chicago, he worked at the IBM Research Laboratory, Zurich, Switzerland, Chalmers University of Technology, Goteborg, Sweden, Cavendish Laboratory, University of Cambridge and Raman Research Institute, Bangalore. He is a Past President of the Astronomical Society of India as well as the Division of Space and High Energy Astrophysics of the International Astronomical Union. He is a Fellow of the Indian Academy of Sciences and a former Jawaharlal Nehru Fellow.