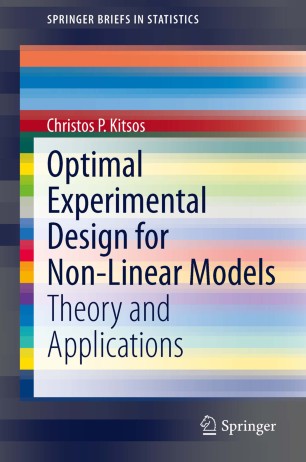 This book tackles the Optimal Non-Linear Experimental Design problem from an applications perspective. At the same time it offers extensive mathematical background material that avoids technicalities, making it accessible to non-mathematicians: Biologists, Medical Statisticians, Sociologists, Engineers, Chemists and Physicists will find new approaches to conducting their experiments. The book is recommended for Graduate Students and Researchers.

Professor Christos Kitsos received his first degree in Mathematics from the University of Athens, Greece (1973), his Master’s in Mathematics & Statistics from the University of New Brunswick, Canada (1978), and his PhD in Statistics from the University of Glasgow, Scotland, UK (1986). His research interests are in Optimal Experimental Design (mainly on Non-Linear), Industrial Statistics, Risk Assessment (in Cancer Bioassays, Environmental etc) and in Information Measures. He has participated in various research Programs in Greece, either as a project leader or researcher. He is also active in the European programs ERASMUS and sometime ago to TEMPUS, visiting and lecturing at a number of European and Greek Universities (U. of Patras, U. of Athens, Athens U. of Economics, and the U. of Thessally). Professor Kitsos is currently lecturing as a Professor of Statistics at the Technological Educational Institute of Athens. He has published 115 papers in journals and in proceedings volumes and 78 for conferences. As a head of local organizing committees, he has worked for major international conferences such as MODA, ICRA etc. He has published 8 university-level books on Statistics and Mathematics in Greek; in English he is the co- editor, among other editions, of 3 editions on Industrial Statistics, Model Oriented Data Analysis and Qualitative Methods on Cancer and has published two monographs concerning the Calibration Problem and the Cancer Bioassays. Currently, Professor Kitsos is a member of both the ISI proper and its Committee of Risk Assessment; of the IASC (International Association of Statistical Computing) where he served as a council member from 1998-2001) and a council member of the Greek Statistical Institute. He also served as the Head of the Department of Mathematics (2005-2010) and the Head of the Liaison Office (2004-2008) at the Technological Educational Institute of Athens.