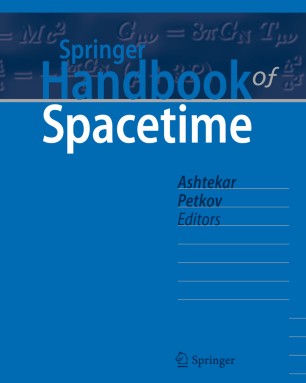 The Springer Handbook of Spacetime is dedicated to the ground-breaking paradigm shifts embodied in the two relativity theories, and describes in detail the profound reshaping of physical sciences they ushered in. It includes in a single volume chapters on foundations, on the underlying mathematics, on physical and astrophysical implications, experimental evidence and cosmological predictions, as well as chapters on efforts to unify general relativity and quantum physics. The Handbook can be used as a desk reference by researchers in a wide variety of fields, not only by specialists in relativity but also by researchers in related areas that either grew out of, or are deeply influenced by, the two relativity theories: cosmology, astronomy and astrophysics, high energy physics, quantum field theory, mathematics, and philosophy of science. It should also serve as a valuable resource for graduate students and young researchers entering these areas, and for instructors who teach courses on these subjects.

Features
› Concise, clear and coherent presentation
› Research and application-oriented
› Includes recent developments
› Exhaustive references to approved data
› All chapters with summaries
› A resource for graduate students, researchers and teachers in the field