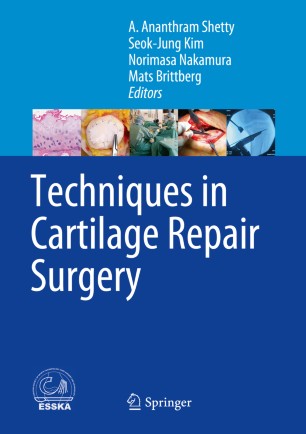 Cartilage defects are common. Cartilage repair surgery is not only fascinating but also surgically challenging. There are books dealing with basic science and some surgical aspect. This book fills a gap in surgical techniques for cartilage repair.

All of the surgical chapters are logically organised, covering patient selection, patient setup/positioning, surgical approach, potential complications and troubleshooting. An attempt is made to compare with various surgical techniques. This book also covers anaesthesia, postoperative follow-up, pain management and rehabilitation. Both the editors and the authors are renowned experts in the field. This book will be invaluable for orthopaedic and sports medicine surgeons (consultants and training doctors) and is also of potential interest to physiotherapists, medical students, general practitioners, physical medicine and rehabilitation specialists, and rheumatology specialists.

A. Ananthram Shetty, MDMCh, FRCS Ed., FRCS Eng., FRCS Orth., FRSM, is Professor and Director of Minimally Invasive Orthopaedic Surgery at the Faculty of Health and Social Science, Canterbury Christchurch University, UK and Honorary Senior Lecturer at the Department of Surgery, Kings’ College, London, UK. He is one of the founders of the Shetty-Kim Research Foundation and heads the Department of Orthopaedics at the Kent Institute of Medicine and Surgery. Dr. Shetty is among the leading knee surgeons in the United Kingdom. His main interests are stem cell research, cartilage transplant, and the application of computer navigation and robotics in minimally invasive surgery. He has published widely and has delivered many national and international lectures, including the Royal Society of Medicine Innovation Lecture. He has won many awards, including the Fred Heatley research award and the Laing & Buisson innovation award, and is a visiting professor to various international universities.

Norimasa Nakamura, MD, PhD is an orthopaedic specialist at the Department of Rehabilitation Science, Osaka Health Science University, Osaka City, Osaka, Japan. He is a Professor at the Institute for Medical Science in Sports, Osaka Health Science University and Invited Professor at the Center for Advanced Medical Engineering and Informatics, Osaka University. Dr. Nakamura is Secretary General of the International Cartilage Repair Society and a member of the Board of Directors of the International Society of Arthroscopy, Knee Surgery and Orthopaedic Sports Medicine (ISAKOS) as well as Deputy Chair of the ISAKOS Scientific Committee. He is also a member of the General Boards of the Japanese Orthopaedic Society of Knee, Arthroscopy & Sports Medicine, the Japanese Arthroscopy Association, and the Japanese Knee Society. Dr. Nakamura is on the editorial boards of Cartilage and the Journal of Orthopaedic Science and is a principal reviewer for the American Journal of Sports Medicine. He is the recipient of many awards and the author of more than 80 peer-reviewed articles.

Seok-Jung Kim, MD, PhD, FRCS, is Associate Professor and Director of the Cell Therapy Center at Uijeongbu St. Mary’s Hospital, Catholic University of Korea Medical College and also Vice-Dean of the College. Dr. Kim is International Editor of the Journal of Clinical Rehabilitative Tissue Engineering Research and a member of the Academic Board of the Korean Orthopedic Research Society. He has received a number of awards, including the International Einstein Award and International Scientist of the Year from the International Biographical Institute and membership of the Hall of Fame for Distinguished Accomplishments from the American Biographical Institute. Dr. Kim is the author of almost 30 articles in peer-reviewed journals.

Mats Brittberg, MD, PhD, is a member of the Cartilage Research Unit, Department of Orthopedics Surgery, University of Gothenburg and an orthopedic surgeon at Kungsbacka Hospital, Sweden.  Since 2002, he has been an Associate Professor of Orthopedics at Sahlgrenska Academy, University of Gothenburg. Dr. Brittberg’s research has focused especially on cartilage regeneration with in vitro expanded autologous chondrocytes. He has been on the board of TESi (Tissue Engineering Society International) and chaired the Cartilage Committee of ESSKA from 2006 to 2008. Since 1997 he has been working with the International Cartilage Repair Society (ICRS), including as Secretary, Vice-president and President (2006-2008) and as Past-President (2008-2009). He is now associate editor for the recently started Sage journal Cartilage and also the ESSKA journal as well as being on the editorial board of Osteoarthritis and Cartilage. In September 2010, Mats Brittberg received the ICRS Genzyme Lifetime Achievement Award in cartilage research.

“This is an outstanding reference & atlas on practice and research in upper and lower extremities’ joints. … I recommend this excellent text to all orthopedic surgeons and biomechanists in transplant research using mesenchymal derived tissues.” (Joseph J. Grenier, Amazon.com, November, 2015)