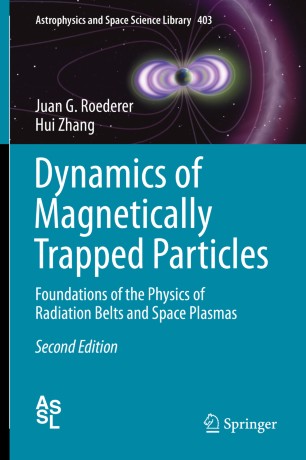 Foundations of the Physics of Radiation Belts and Space Plasmas

This book is a new edition of Roederer’s classic Dynamics of Geomagnetically Trapped Radiation, updated and considerably expanded. The main objective is to describe the dynamic properties of magnetically trapped particles in planetary radiation belts and plasmas and explain the physical processes involved from the theoretical point of view. The approach is to examine in detail the orbital and adiabatic motion of individual particles in typical configurations of magnetic and electric fields in the magnetosphere and, from there, derive basic features of the particles’ collective “macroscopic” behavior in general planetary environments. Emphasis is not on the “what” but on the “why” of particle phenomena in near-earth space, providing a solid and clear understanding of the principal basic physical mechanisms and dynamic processes involved. The book will also serve as an introduction to general space plasma physics, with abundant basic examples to illustrate and explain the physical origin of different types of plasma current systems and their self-organizing character via the magnetic field. The ultimate aim is to help both graduate students and interested scientists to successfully face the theoretical and experimental challenges lying ahead in space physics in view of recent and upcoming satellite missions and an expected wealth of data on radiation belts and plasmas.