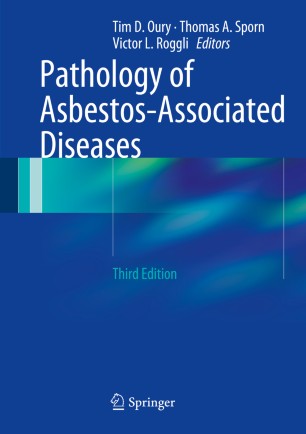 The third edition of Pathology of Asbestos-Associated Diseases builds on the success of the previous editions by fully updating knowledge on diagnostic and epidemiologic aspects and presenting important new insights derived from new epidemiologic studies and animal studies. Background information is first provided on the mineralogy of asbestos, occupational and environmental exposure, and asbestos bodies. The various diseases associated with asbestos exposure are then considered in turn, with detailed description and illustration of pathologic features as well as extensive discussion of etiology, epidemiology, differential diagnosis, treatment, and prognosis. Further chapters are devoted to cytopathology, experimental models of disease, and analysis of tissue mineral fiber content. In addition, the medicolegal issues relating to asbestos-associated diseases are analyzed from the point of view of both the plaintiff and the defendant. This book will be an essential reference for pathologists and an invaluable source of information for pulmonologists, radiologists, and occupational medical practitioners.

Tim Oury, BS, PhD, MD, is Professor of Pathology at the University of Pittsburgh School of Medicine. In addition, he is Co-Director of the Pathologist Investigator Residency/Research Training Program in Pittsburgh, and a member of the Simmons Center for Interstitial Lung Disease and the Center for the Environmental Basis of Human Disease. Professor Oury has been the recipient of a variety of awards and honors. In 2003 he was the recipient of the American Heart Association’s Established Investigator Award and in 2009 was selected as one of “America’s Top Pathologists” in the Guide to America’s Top Physicians. He is an Executive Editorial Board Member of the International Journal of Clinical and Experimental Pathology and a regular reviewer for several other leading journals. He has been the lead author or co-author on over 100 publications in peer-reviewed journals, editorials, books and book chapters and is currently the Principal Investigator on research projects addressing the importance of extracellular superoxide dismutase in the pathogenesis of pulmonary fibrosis and the role of RAGE and RAGE ligands in pulmonary fibrosis.

Victor Roggli, BA, MD, studied at the Baylor College of Medicine, where he subsequently became Instructor and Chief Resident. In 1980 he joined the Department of Pathology at Duke University Medical Center and was appointed Assistant Professor in 1981, Associate Professor in 1989 and Professor in 1994. Professor Roggli is also affiliated to the Durham Veteran's Administration Medical Center, Durham, N.C. His research interests have long included asbestos-related diseases. He has been a member of the U.S.-Canadian Mesothelioma Panel since 1987 and for more than a decade served on the Scientific Advisory Board of the Mesothelioma Applied Research Foundation. Professor Roggli was also President of the Pulmonary Pathology Society from 2000 to 2002 and a member of the International Association for Study of Lung Cancer Pathology Panel in 2004. Since 2007 he has been Co-Chairman of the Asbestosis Committee of the College of American Pathologists/Pulmonary Pathology Society. He is a long-standing member of the Editorial Boards of Modern Pathology and Archives of Pathology and Laboratory Medicine, and has 170 articles in peer-reviewed journals to his name as well as several books and numerous book chapters and editorials.