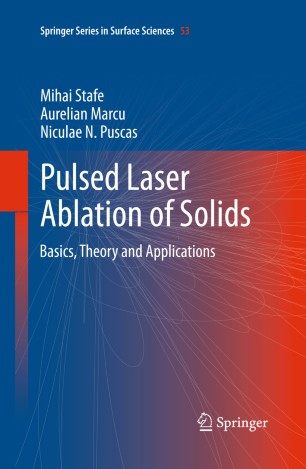 The book introduces ‘the state of the art' of pulsed laser ablation and its applications. It is based on recent theoretical and experimental studies. The book reaches from the basics to advanced topics of pulsed laser ablation. Theoretical and experimental fundamental phenomena involved in pulsed laser ablation are discussed with respect to material properties, laser wavelength, fluence and intensity regime of the light absorbed linearly or non-linearly in the target material. The energy absorbed by the electrons leads to atom/molecule excitation, ionization and/or direct chemical bond breaking and is also transferred to the lattice leading to material heating and phase transitions. Experimental  non-invasive optical methods for analyzing these phenomena in real time are described. Theoretical models for pulsed laser ablation and phase transitions induced by laser beams and laser-vapour/plasma interaction during the plume expansion above the target are also presented. Calculations of the ablation speed and dimensions of the ablated micro- and nano-structures are performed. The validity and required refinement of different models in different experimental conditions is provided. The pulsed laser deposition process which bases on collecting the ablated particles on a surface is analyzed in terms of efficiency and quality of the deposited films as a function of ambient conditions, target material, laser parameters and substrate characteristics. The interaction between the incident laser and the ablation plasma is analyzed with respect to its influence on the structures of the deposited films and its capacity to generate high harmonics and single attosecond pulses which are highly desirable in pump-probe experiments.