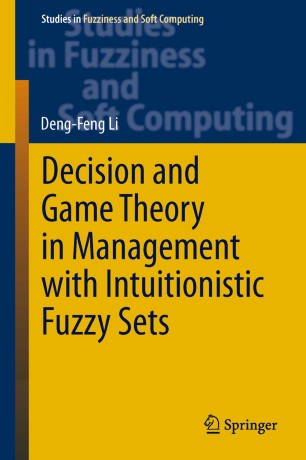 Decision and Game Theory in Management With Intuitionistic Fuzzy Sets

Part of the Studies in Fuzziness and Soft Computing book series (STUDFUZZ, volume 308)

Deng-Feng Li was born in 1965. He received both his B.Sc. and M.Sc. degrees in Applied Mathematics from the National University of Defense Technology, Changsha, China, in 1987 and 1990, respectively, and completed his Ph.D. in System Science and Optimization at the Dalian University of Technology, Dalian, China, in 1995. From 2003 to 2004, he was a visiting scholar at the School of Management, University of Manchester Institute of Science and Technology, UK.
He is currently a “Minjiang Scholar” Distinguished Professor and an Assistant Dean of the School of Management, Fuzhou University, China. He has published more than 200 international journal papers and four monographs and is the coauthor of one monograph and three textbooks. His current research interests include fuzzy decision analysis, group decision-making, fuzzy game theory, fuzzy sets and system analysis, fuzzy optimization and differential games in economic management. He has been recognized with eighteen scientific achievement awards.

“The main goal of the book under review is to establish theories and methods of both decision and game analysis in management using intuitionistic fuzzy sets (IFS). … the presented results are very useful for theoreticians and practitioners of decision-making.” (Krzysztof Piasecki, zbMATH, Vol. 1291, 2014)
Buy options