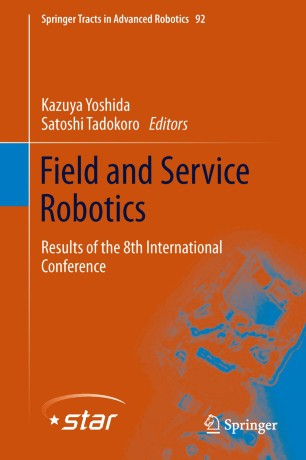 Results of the 8th International Conference

FSR, the International Conference on Field and Service Robotics, is the leading single track conference of robotics for field and service applications. This book presents the results of FSR2012, the eighth conference of Field and Service Robotics, which was originally planned for 2011 with the venue of Matsushima in Tohoku region of Japan. However, on March 11, 2011, a magnitude M9.0 earthquake occurred off the Pacific coast of Tohoku, and a large-scale disaster was caused by the Tsunami which resulted, therefore the conference was postponed by one year to July, 2012. In fact, this earthquake raised issues concerning the contribution of field and service robotics technology to emergency scenarios. A number of precious lessons were learned from operation of robots in the resulting, very real and challenging, disaster environments. Up-to-date study on disaster response, relief and recovery was then featured in the conference. This book offers 43 papers on a broad range of topics including: Disaster Response, Service/Entertainment Robots, Inspection/Maintenance Robots, Mobile Robot Navigation, Agricultural Robots, Robots for Excavation, Planetary Exploration, Large Area Mapping, SLAM for Outdoor Robots, and Elemental Technology for Mobile Robots.

“This book offers a must-read volume for researchers involved in the field of mobile robotics. … this book has a clear structure and is fairly readable. The topic covered may be adequate for graduate-level studies.” (Ramon Gonzalez Sanchez, Computing Reviews, October, 2014)
Buy options