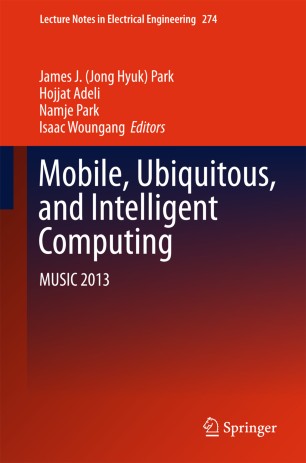 MUSIC 2013 will be the most comprehensive text focused on the various aspects of Mobile, Ubiquitous and Intelligent computing. MUSIC 2013 provides an opportunity for academic and industry professionals to discuss the latest issues and progress in the area of intelligent technologies in mobile and ubiquitous computing environment. MUSIC 2013 is the next edition of the 3rd International Conference on Mobile, Ubiquitous, and Intelligent Computing (MUSIC-12, Vancouver, Canada, 2012) which was the next event in a series of highly successful International Workshop on Multimedia, Communication and Convergence technologies MCC-11 (Crete, Greece, June 2011), MCC-10 (Cebu, Philippines, August 2010).

Professor James J. (Jong Hyuk) Park received his Ph.D. degree in Graduate School of Information Security from Korea University, Korea. From December, 2002 to July, 2007, Dr. Park had been a research scientist of R&D Institute, Hanwha S&C Co., Ltd., Korea. From September, 2007 to August, 2009, He had been a professor at the Department of Computer Science and Engineering, Kyungnam University, Korea. He is now a professor at the Department of Computer Science and Engineering, Seoul National University of Science and Technology (SeoulTech), Korea. Dr. Park has published about 100 research papers in international journals and conferences. He has been serving as chairs, program committee, or organizing committee chair for many international conferences and workshops. He is a president of the Future Technology Research Association International (FTRA) and Korea Information Technology Convergence Society (KITCS). He is editor-in-chief of Human-centric Computing and Information Sciences(HCIS) by Springer, International Journal of Information Technology, Communications and Convergence (IJITCC) by InderScience, and Journal of Convergence (JoC) by FTRA Publishing.

Professor Hojjat Adeli received his Ph.D. in Civil/Structural Engineering from Stanford University in 1976. He is currently the Abba G. Lichtenstein Professor of Civil Engineering at The Ohio State University. He has authored over 450 research publications including 14 books. He is a Distinguished Member of American Society of Civil Engineers, a Fellow of the American Association for the Advancement of Science, and the Founder and Editor-in-Chief of the international journal Computer-Aided Civil and Infrastructure Engineering. In 1998 with a former Ph.D. student, Dr. H.S. Park, he was awarded a U.S. patent for his neural dynamic optimization model.

Professor Namje Park  received the BSc degree in information industry from Dongguk University, Korea in 2000, and received his M.S., and Ph.D. degrees in computer Engineering from ungkyunkwan University in 2003, and 2008 respectively. Dr. Park, Assoc. Development Engineer of School of Engineering and Applied Science have joined University of California, Los Angeles (UCLA) since 2009. Prior to joining the researcher at UCLA, he had an appointment as the senior engineer of the Information Security Research Division of the Electronics and Telecommunication Research Institute (ETRI) for 5 years. ETRI is a non-profit government-funded research organization that has been at the forefront of technological excellence for 30 years. He is concerned in the information security technology field for the mobile environments, RFID/Sensor Network, smart card system, electronic payment, XML/Web Services Security, ubiquitous computing including RFID and a variety of cryptographic technologies. He has many talks related in information security technologies. As writings, he has many patents and research papers about the fast implementation on S/W system such as mobile S/W and RFID/WSN. Also he has published some books related to RFID/WSN security. Especially, as the co-work Editor of ITU-T SG17, he leads international standardization about the WSN security framework in the telecommunication system. He was registered in International Who's Who 2007-2009 edition. He has received a Recognition Award form MIC(Ministry of Information and Communication)'s Mobile RFID forum.

Professor Isaac Woungang received his M.Sc and Ph.D degrees all in Mathematics from Université de la Méditerranée-Aix Marseille II, Luminy, France, and Université du Sud, Toulon-Var, France, in 1990 and 1994 respectively. In 1999, he received a M.A.Sc from the INRS-Énergie, Matériaux et Télécommunications,University of Quebec, Montreal, Canada. From 1999 to 2002, he worked as a Software engineer at Nortel Networks. Since 2002, he has been with the Department of Computer Science at Ryerson University. In 2004, he founded the Distributed Applications and Broadband NEtworks Laboratory (DABNEL) R&D group. His research interest includes Network security, Computer communication networks, Mobile communication systems, and Coding theory. He serves as Co-Editor in Chief of the International Journal of Communication Networks & Distributed Systems (IJCNDS), Inderscience, U.K, and the International Journal of Information and Coding Theory (IJICoT), Inderscience, U.K, as Associate Editor of the International Journal of Communication Systems (IJCS), Wiley, the Computers & Electrical Engineering (C&EE), An International Journal, Elsevier. Dr. Woungang edited several books in the areas of wireless ad hoc networks, wireless sensor networks, wireless mesh networks, pervasive computing, and coding theory, published by reputed publishers such as Springer, Elsevier, Wiley, and World Scientific. He has been serving as Organizing Chair, Track Chair, and Program Chair of several International conferences, and in the Program Committees of over a dozen International conferences.