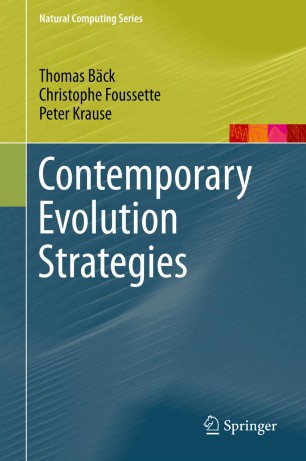 This book provides an overview of the key algorithm developments between 1990 and 2012, including brief descriptions of the algorithms, a unified pseudocode representation of each algorithm, and program code which is available for download. In addition, a taxonomy of these algorithms is provided to clarify similarities and differences as well as historical relationships between the various instances of evolution strategies. Moreover, due to the authors’ focus on industrial applications of nonlinear optimization, all algorithms are empirically compared on the so-called BBOB (Black-Box Optimization Benchmarking) test function suite, and ranked according to their performance. In contrast to classical academic comparisons, however, only a very small number of objective function evaluations is permitted. In particular, an extremely small number of evaluations, such as between one hundred and one thousand for high-dimensional functions, is considered. This is motivated by the fact that many industrial optimization tasks do not permit more than a few hundred evaluations. Our experiments suggest that evolution strategies are powerful nonlinear direct optimizers even for challenging industrial problems with a very small budget of function evaluations.

The book is suitable for academic and industrial researchers and practitioners.

Thomas Bäck is a full Professor of Computer Science at Leiden University, The Netherlands. He received his PhD, under the supervision of Hans-Paul Schwefel, from Dortmund University, Germany in 1994, and worked for the Informatik Centrum Dortmund from 1994 to 2000. He is president and founder of divis intelligent solutions, a company providing optimization and data mining software and consulting services; among its clients are companies such as Audi, BMW, Daimler, Ford and Honda. He has more than 200 publications on natural computing algorithms; he wrote the book  Evolutionary Algorithms: Theory and Practice, coedited the Handbook of Evolutionary Computation, and coedited the Handbook of Natural Computing. He received the best dissertation award from the Gesellschaft für Informatik (GI) in 1995 and is an elected fellow of the Intl. Society for Genetic and Evolutionary Computation.

Christophe Foussette is a software development expert at divis intelligent solutions, Dortmund, Germany; previously he worked for NuTech Solutions. He received his MSc from Dortmund University in 2013. He specializes in data mining and nonlinear optimization algorithms based on evolution strategies, applied to complex industrial problems.

Peter Krause is the head of project management and R&D at divis intelligent solutions, Dortmund, Germany. He received his PhD from Dortmund University in 2001. His research focused on data mining, fuzzy logic and the generation and optimization of fuzzy systems. From 2002 to 2009 he worked with NuTech Solutions as senior scientist and project manager, supervising customer projects and developing new methods in the field of data-driven modeling and model analysis. He has authored than 30 research publications, and has considerable experience in deploying single- and multiobjective contemporary evolution strategies for practical problems in industry; he also is an expert in object-oriented development, GUI development, SQL and C/C++.