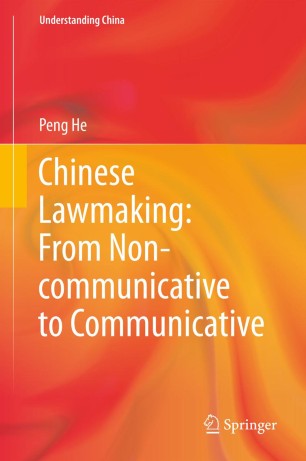 Dr Peng He in her book addresses various issues, drawing on Western and Chinese sources for her argument for a ‘communicative’ theory of law making. This book is both timely and important in the Chinese context. Her argument depends upon the insight that what is important in societies is not just representative democracy but ‘voice’ - the opportunity for individuals to be heard and bring their input into official systems.  More than that, she argues that this can also take further the idea of living by the rules as something that is not to be seen as narrow Legalism but as something more akin to living ‘righteously’ – a view which is resonant with parts of Chinese legal thought.

This book is also important in the present Chinese context in another way. The developing economy necessitates substantial legal reform.  But applying Western models to China can often be naïve and not fully fulfil their intended purpose. Peng He’s work addresses this by looking at the process of legislation in connection with legal reform. It is grounded in a sound theoretical reflection of both the process of legal transplantation and the process of law making, and looks both at Western and Chinese sources. Such an approach needs to draw from several intellectual traditions and it is this interdisciplinary, foundational research that is the task Dr He has set herself in her project. Her theory will provide an abstract theoretical framework that is sensitive to local conditions, while at the same time incorporating insights on law reform from a broad range of disciplines. Her research is of direct practical relevance for reforming the legislative process in China.

The University of Edinburgh

Peng He’s primary interests lie in legal research and education, which she developed throughout the course of her studies and further work. She has received a number of prestigious awards, including the Overseas Research Student (ORS) Award in the U.K. and the People’s Scholarship for University Students in China. Having received her Ph.D. in Law from the University of Edinburgh and her LLM in Legal History at Zhongnan University of Economics and Law, she has published various works on legal theory and legal history, including: The Difference between Chinese Legalism and Western Legalism (Frontiers of Law in China, Higher Education and Springer, 2011，vol. 6, no. 4, pp. 645-669), The Father of the Republican Constitution and the Shattered Dream of Establishing Constitutionalism in the Republic of China (Chinese and Western Legal Traditions, vol. 7, 2009, pp. 530-542), Another Way to Consider the Issue of Compiling the Chinese Civil Code - Using Savigny’s Perspective for Reference (China Knowledge-Based Economy, 2004, pp. 38-40). Ms He also assisted in the first translation into Chinese of a frequently cited book, Local Government in China under the Ch’ing [first Published by Harvard University in 1962. The translation was published by Beijing: Law Press in 2011]. Currently a lecturer at Zhongnan University of Economics and Law, she teaches courses covering legal theory and law in films.