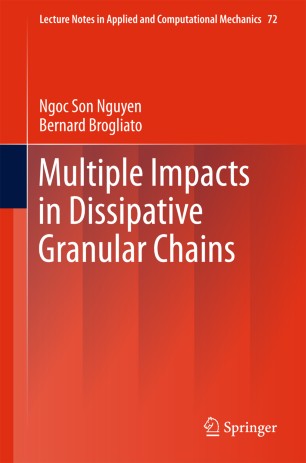 The extension of collision models for single impacts between two bodies, to the case of multiple impacts (which take place when several collisions occur at the same time in a multibody system) is a challenge in Solid Mechanics, due to the complexity of such phenomena, even in the frictionless case. This monograph aims at presenting the main multiple collision rules proposed in the literature. Such collisions typically occur in granular materials, the simplest of which are made of chains of aligned balls. These chains are used throughout the book to analyze various multiple impact rules which extend the classical Newton (kinematic restitution), Poisson (kinetic restitution) and Darboux-Keller (energetic or kinetic restitution) approaches for impact modelling. The shock dynamics in various types of chains of aligned balls (monodisperse, tapered, decorated, stepped chains) is carefully studied and shown to depend on several parameters: restitution coefficients, contact stiffness ratios, elasticity coefficients (linear or nonlinear force/ indentation relation), and kinetic angles (that depend on the mass ratios). The dissipation and the dispersion of kinetic energy during a multiple impact are mandatory modelling, and are quantified with suitable indices. Particular attention is paid to the ability of the presented laws to correctly predict the wave effects in the chains. Comparisons between many numerical and experimental results are shown, as well as comparisons between four different impact laws in terms of their respective abilities to correctly model dissipation and dispersion of energy.