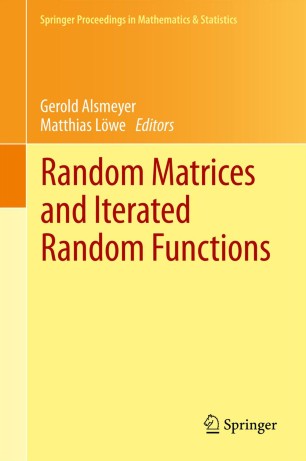 Random Matrices are one of the major research areas in modern probability theory, due to their prominence in many different fields such as nuclear physics, statistics, telecommunication, free probability, non-commutative geometry, and dynamical systems. A great deal of recent work has focused on the study of spectra of large random matrices on the one hand and on iterated random functions, especially random difference equations, on the other. However, the methods applied in these two research areas are fairly dissimilar. Motivated by the idea that tools from one area could potentially also be helpful in the other, the volume editors have selected contributions that present results and methods from random matrix theory as well as from the theory of iterated random functions. This work resulted from a workshop that was held in Münster, Germany in 2011. The aim of the workshop was to bring together researchers from two fields of probability theory: random matrix theory and the theory of iterated random functions. Random matrices play fundamental, yet very different roles in the two fields. Accordingly, leading figures and young researchers gave talks on their field of interest that were also accessible to a broad audience.