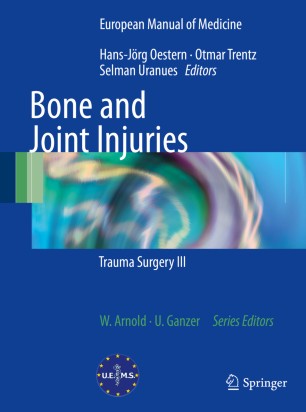 Part of the European Manual of Medicine book series (EUROMANUAL)

All European countries, including those that have recently joined the European Union or are candidates for membership, currently show a clear trend towards an increasing number of accidental injuries. This holds true for a range of injuries, including accidents among the elderly, sports injuries, and trauma due to traffic accidents. The increase in the number of injuries is accompanied by rising expectations among patients, who anticipate good functional results even after serious injuries. Despite these developments, trauma surgery is not yet established as an independent field in all European countries. Against this background, there is a clear need for a book that covers the state of the art in trauma surgery. This volume, which focuses on bone and joint injuries orthopedic trauma is intended to help to meet this need. It will also serve to harmonize the practice of trauma surgery within the European Union and to prepare for the UEMS EBSQ trauma surgery.

“This third volume in the Trauma Surgery series of the European Manual of Medicine is devoted to orthopedic injuries. It provides an overview of good clinical practice for treating musculoskeletal trauma. The audience is senior surgeons in training or who are managing patients with orthopedic trauma.” (David J. Dries, Doody’s Book Reviews, August, 2014)