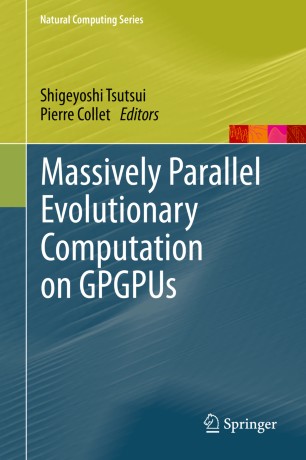 Evolutionary algorithms (EAs) are metaheuristics that learn from natural collective behavior and are applied to solve optimization problems in domains such as scheduling, engineering, bioinformatics, and finance. Such applications demand acceptable solutions with high-speed execution using finite computational resources. Therefore, there have been many attempts to develop platforms for running parallel EAs using multicore machines, massively parallel cluster machines, or grid computing environments. Recent advances in general-purpose computing on graphics processing units (GPGPU) have opened up this possibility for parallel EAs, and this is the first book dedicated to this exciting development.

The three chapters of Part I are tutorials, representing a comprehensive introduction to the approach, explaining the characteristics of the hardware used, and presenting a representative project to develop a platform for automatic parallelization of evolutionary computing (EC) on GPGPUs. The ten chapters in Part II focus on how to consider key EC approaches in the light of this advanced computational technique, in particular addressing generic local search, tabu search, genetic algorithms, differential evolution, swarm optimization, ant colony optimization, systolic genetic search, genetic programming, and multiobjective optimization. The six chapters in Part III present successful results from real-world problems in data mining, bioinformatics, drug discovery, crystallography, artificial chemistries, and sudoku.

Although the parallelism of EAs is suited to the single-instruction multiple-data (SIMD)-based GPU, there are many issues to be resolved in design and implementation, and a key feature of the contributions is the practical engineering advice offered. This book will be of value to researchers, practitioners, and graduate students in the areas of evolutionary computation and scientific computing.

Prof. Shigeyoshi Tsutsui received his B.Eng. and M.Eng. in electrical engineering in 1967 and 1969 respectively from Osaka City University, and he received his Ph.D. in 1985 from Osaka Prefecture University. From 1969 to 1986 he worked in Hitachi's Central Research Laboratories and Systems Development Laboratories. He joined the staff of Hannan University in 1987, where he is currently a full professor. His reseach interests include computer architectures, information and business science, artificial intelligence, and evolutionary computing, in particular applying genetic algorithms to difficult, multimodal problems.

Prof. Pierre Collet received his master's degree in operating systems from Université de Paris VI in 1990, and his Ph.D. from Université Paris-Sud (Orsay) in 1997, on the topic of computer-aided surgery through virtual reality. From 2000 to 2003 he was a researcher in the Artificial Evolution and Learning team of the Center of Applied Mathematics (CMAP) of École Polytechnique. He joined the Université du Littoral Côte d'Opale in Calais in 2003 as an assistant professor, and defended his habilitation thesis in 2004. In 2007 he became a full professor in the Image Sciences, Computer Sciences and Remote Sensing Laboratory (LSIIT) in Strasbourg, where he led the Theoretical Bionformatics, Data Mining and Stochastic Optimization (BFO) team until December 2012. Since 2011, he has been the head of the Dept. of Computer Science of the Université de Strasbourg, and since 2013 he has led the Strasbourg Complex Systems Digital Campus. His research concentrates on the optimization of complex problems using evolutionary computing, nature-inspired stochastic algorithms, and complex systems, and in particular their implementation on massively parallel hardware, with applications in collaborative work, cellular automata, biomedical devices, chemistry, control, and e-learning.