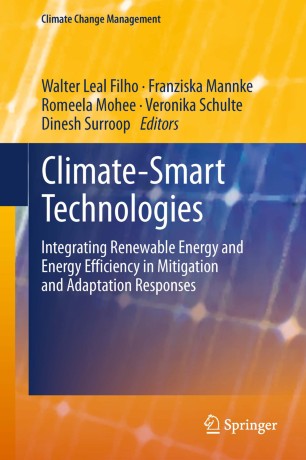 The book addresses the perceived need for a publication with looks at both, climate smart technologies and the  integration of renewable energy and energy efficiency in mitigation and adaptation responses. Based on a set of papers submitted as part of the fifth on-line climate conference (CLIMATE 2012) and a major conference on renewable energy on island States held in Mauritius in 2012, the book provides a wealth of information on climate change strategies and the role of smart technologies. The book has been produced in the context of the project "Small Developing Island Renewable Energy Knowledge  and Technology Transfer Network" (DIREKT), funded by the ACP Science and Technology Programme, an EU  programme for cooperation between the European Union and the ACP region.

Professor Walter Leal (BSc, PhD, DSc, DPhil, DL, DLitt, DEd) is a Senior Professor and Head of the Research and Transfer Centre "Applications of Life Sciences" at the Hamburg University of Applied Sciences in Germany and at London Metropolitan University Business School.