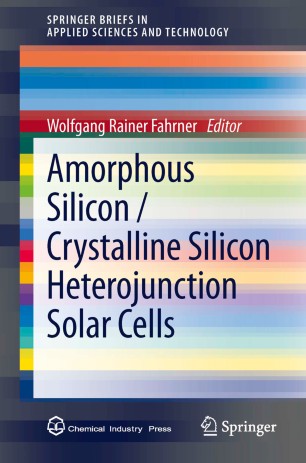 Amorphous Silicon/Crystalline Silicon Solar Cells deals with some typical properties of heterojunction solar cells, such as their history, the properties and the challenges of the cells, some important measurement tools, some simulation programs and a brief survey of the state of the art, aiming to provide an initial framework in this field and serve as a ready reference for all those interested in the subject. This book helps to “fill in the blanks” on heterojunction solar cells. Readers will receive a comprehensive overview of the principles, structures, processing techniques and the current developmental states of the devices.

Prof. Dr. Wolfgang R. Fahrner is a professor at the University of Hagen, Germany and Nanchang University, China.

Prof. Wolfgang R. Fahrner studied in Freiburg, Germany and in Montpellier, France, and received his degree in physics from the University of Freiburg in 1970. From 1970 to 1977, he was employed by the Institute of Applied Solid State Physics of the Fraunhofer Society in Freiburg, where his main research subject was the effect of ion implantation in MOS devices. In 1973, he received his Ph.D. In 1973 and 1974, he took part in a sabbatical research stay at IBM in East Fishkill, N.Y. In 1977, he joined the Hahn-Meitner Institute in Berlin, where he investigated radiation effects in electronic devices. In 1984 and 1985, he again worked for IBM in East Fishkill. In 1988, he was appointed a full professor at the University of Hagen, where he headed the Chair of Electronic Devices. His main research interests were in thin film and polymer solar cell technology.
Prof. Fahrner has authored or co-authored more than 600 reviewed papers and four books, and holds 12 patents. He is a member of the Electrochemical Society and of the German Physical Society, as well as a senior member of the IEEE.
He retired from Hagen University in 2010 and since then has been appointed professor and director of the Institute of Solar Cells at the School of Photovoltaic, Nanchang University, China.