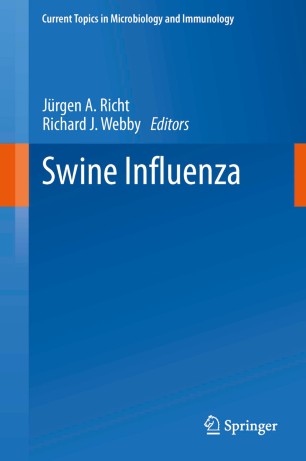 The central role which swine have played in the ecology of influenza is set out in this book in 15 chapters within a comprehensive international framework. The result is a ‘One Health’ perspective on the role of swine influenza viruses (SIVs) at the animal-human-environmental interface.  The epidemiology of swine influenza worldwide is now of exceptional importance with the pig potentially acting as a “mixing vessel” where both avian and human influenza viruses can undergo genetic reassortment resulting in the creation of novel viruses that can cross species barriers.

The genetic features of SIVs with either limited or efficient spread to and between humans are largely unknown, but the host range barrier between human and swine highlights the fact that adaptation of a virus in one mammalian host does not necessarily mean that it is well adapted to replication in another. However, in 2012 zoonotic transmission of SIV (both H3N2 and H1N2 subtypes) containing the matrix gene from the 2009 pandemic H1N1 virus was reported. These strains appeared to be able to spread more easily from pigs to people than other influenza viruses of swine. Therefore, this multifaceted book has assumed greater significance. Clearly, the dynamic nature and the national and international complexity of SIVs pose challenges for the swine industry as a recurring respiratory disease in swine, and also for public health as a continuing source of zoonotic infection.