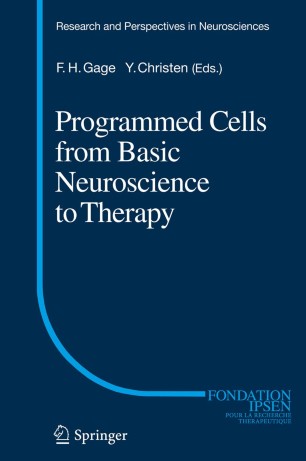 Part of the Research and Perspectives in Neurosciences book series (NEUROSCIENCE, volume 20)

The recent advances in Programming Somatic Cell (PSC) including induced Pluripotent Stem Cells (iPS) and Induced Neuronal phenotypes (iN), has changed the experimental landscape and opened new possibilities. The advances in PSC have provided an important tool for the study of human neuronal function as well as neurodegenerative and neurodevelopmental diseases in live human neurons in a controlled environment. For example, reprogramming cells from patients with neurological diseases allows the study of molecular pathways particular to specific subtypes of neurons such as dopaminergic neurons in Parkinson’s Disease, Motor neurons for Amyolateral Sclerosis or myelin for Multiple Sclerosis. In addition, because PSC technology allows for the study of human neurons during development, disease-specific pathways can be investigated prior to and during disease onset. Detecting disease-specific molecular signatures in live human brain cells, opens possibilities for early intervention therapies and new diagnostic tools. Importantly, it is now feasible to obtain gene expression profiles from neurons that capture the genetic uniqueness of each patient. Importantly, once the neurological neural phenotype is detected in vitro, the so-called “disease-in-a-dish” approach allows for the screening of drugs that can ameliorate the disease-specific phenotype. New therapeutic drugs could either act on generalized pathways in all patients or be patient-specific and used in a personalized medicine approach. However, there are a number of pressing issues that need to be addressed and resolved before PSC technology can be extensively used for clinically relevant modeling of neurological diseases.