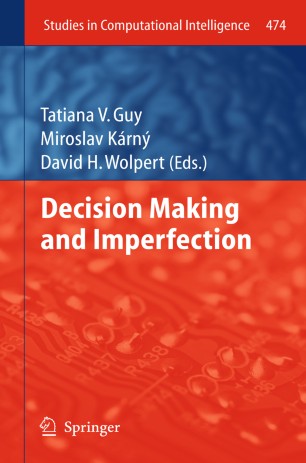 Decision making (DM) is ubiquitous in both natural and artificial systems. The decisions made often differ from those recommended by the axiomatically well-grounded normative Bayesian decision theory, in a large part due to limited cognitive and computational resources of decision makers (either artificial units or humans). This state of a airs is often described by saying that decision makers are imperfect and exhibit bounded rationality. The neglected influence of emotional state and personality traits is an additional reason why normative theory fails to model human DM process.

The book is a joint effort of the top researchers from different disciplines to identify sources of imperfection and ways how to decrease discrepancies between the prescriptive theory and real-life DM. The contributions consider:

·          how a crowd of imperfect decision makers outperforms experts' decisions;

·          how to decrease decision makers' imperfection by reducing knowledge available;

·          how to decrease imperfection via automated elicitation of DM preferences;

·          a human's limited willingness to master the available decision-support tools as an additional source of imperfection;

·          how the decision maker's emotional state influences the rationality;  a DM support of edutainment robot based on its system of values and respecting emotions.

The book will appeal to anyone interested in the challenging topic of DM theory and its applications.