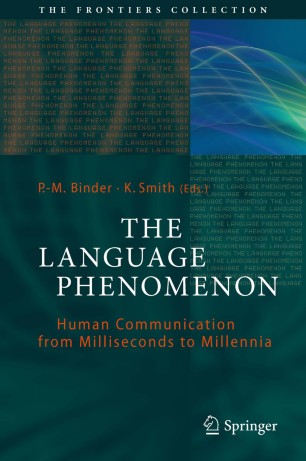 Human Communication from Milliseconds to Millennia

This volume contains a contemporary, integrated description of the processes of language. These range from fast scales (fractions of a second) to slow ones (over a million years). The contributors, all experts in their fields, address language in the brain, production of sentences and dialogues, language learning, transmission and evolutionary processes that happen over centuries or millenia, the relation between language and genes, the origins of language, self-organization, and language competition and death. The book as a whole will help to show how processes at different scales affect each other, thus presenting language as a dynamic, complex and profoundly human phenomenon.

Philippe Binder is a Professor of Physics at the University of Hawaii  at Hilo and a Faculty Fellow at the New England Complex Systems Institute. His areas of interest are chaos and complex systems, including multiscale analysis. He received his advanced training at Yale and Oxford. Like millions of people worldwide, he is trilingual.
Kenny Smith is a Lecturer in the Language Evolution and Computation Research Unit, School of Philosophy, Psychology and Language Sciences, University of Edinburgh, with interests in the evolution of communication, human language and the human capacity for language. He uses a mix of modeling and experimental techniques to address these questions.

“The Language Phenomenon: Human Communication From Milliseconds to Millennia … aims to present ‘topics in a manner accessible also to scientifically literate non-specialists wishing to gain insight into’ areas with which they may not be familiar. … the psychologist who wishes to broaden his or her perspective beyond psycholinguistics will find much food for thought in this volume. … the authors have successfully reached their goal of introducing the ‘scientifically literate’ reader to ‘the language phenomenon.’” (John G. Benjafield, PsycCRITIQUES, Vol. 58 (44), October, 2013)

“The author does a credible job on describing the biological, sociocultural, anthropological, psychological, and linguistic origins and manifestations of human language. … The book will be of use to linguists, psychologists, biologists, and anthropologists working in this field.” (Joseph J. Grenier, Amazon.com, September, 2013)