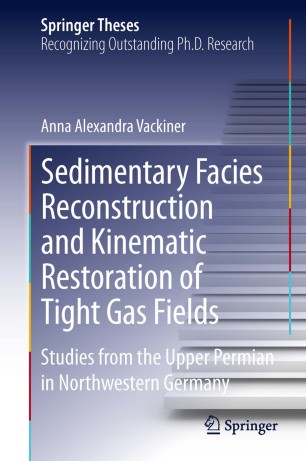 Studies from the Upper Permian in Northwestern Germany

The thesis of Anna Alexandra Vackiner focuses on the geometric architecture and tectonic evolution of the Permian series, combining seismic interpretation (3D block), field studies in an analogue basin (Panamint Valley in California), as well as 2D restoration of representative cross sections through time in order to illustrate the complex interaction between multiphase extension, inversion and salt diapirism. It will be of major interest for exploration geologists involved in tectonically complex areas.
- François Roure, August 2012

This thesis improves the understanding and localization of the Upper Rotliegend II tight gas reservoir rock facies. It provides insights into the detailed Upper Rotliegend II palaeo-topography and local tectonically induced sediment thickness changes prior to a multi-phase tectonic overprinting. The research presented in this study further focuses on the tectonically induced synsedimentary facies distribution in transtensional continental settings on the basis of a comparison with a modern field analogue, which enables a detailed analysis of the reservoir rock’s distribution and its properties. The study is rounded off with an analysis of the influence of the multiphase tectonic overprinting on the mature Upper Rotliegend II reservoir rocks.