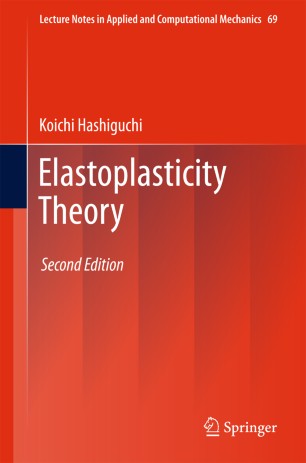 This book was written to serve as the standard textbook of elastoplasticity for students, engineers and researchers in the field of applied mechanics. The present second edition is improved thoroughly from the first edition by selecting the standard theories from various formulations and models, which are required to study the essentials of elastoplasticity steadily and effectively and will remain universally in the history of elastoplasticity. It opens with an explanation of vector-tensor analysis and continuum mechanics as a foundation to study elastoplasticity theory, extending over various strain and stress tensors and their rates. Subsequently, constitutive equations of elastoplastic and viscoplastic deformations for monotonic, cyclic and non-proportional loading behavior in a general rate and their applications to metals and soils are described in detail, and constitutive equations of friction behavior between solids and its application to the prediction of stick-slip phenomena are delineated. In addition, the return-mapping algorithm, the consistent tangent operators and the objective time-integration algorithm of rate tensor are explained in order to enforce the FEM analyses. All the derivation processes and formulations of equations are described in detail without an abbreviation throughout the book.

tensor and constitutive equations, the objective time-derivative of tensor functions, the associated flow rule, the loading criterion, the continuity and smoothness conditions and their substantial physical interpretations in addition to the wide classes of reversible/irreversible constitutive equations of solids and friction behavior between solids.