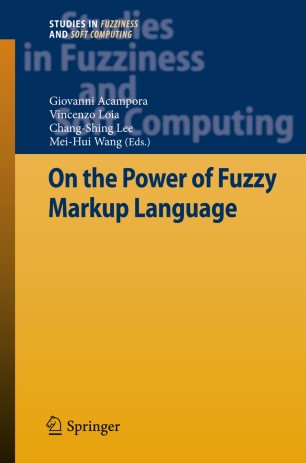 On the Power of Fuzzy Markup Language

Part of the Studies in Fuzziness and Soft Computing book series (STUDFUZZ, volume 296)

One of the most successful methodology that arose from the worldwide diffusion of Fuzzy Logic is Fuzzy Control. After the first attempts dated in the seventies, this methodology has been widely exploited for controlling many industrial components and systems. At the same time, and very independently from Fuzzy Logic or Fuzzy Control, the birth of the Web has impacted upon almost all aspects of computing discipline. Evolution of Web, Web 2.0 and Web 3.0 has been making scenarios of ubiquitous computing much more feasible;  consequently information technology has been thoroughly integrated into everyday objects and activities.

What happens when Fuzzy Logic meets Web technology? Interesting results might come out, as you will discover in this book. Fuzzy Mark-up Language is a son of this synergistic view, where some technological issues of Web are re-interpreted taking into account the transparent notion of Fuzzy Control, as discussed here.  The concept of a Fuzzy Control that is conceived and modeled in terms of a native web wisdom represents another step towards the last picture of Pervasive Web Intelligence.