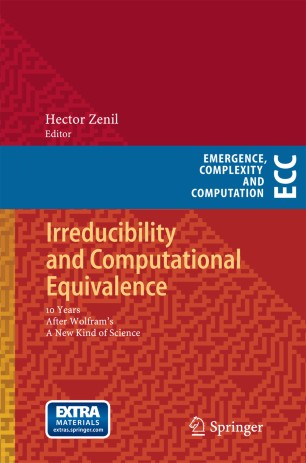 10 Years After Wolfram's A New Kind of Science

It is clear that computation is playing an increasingly prominent role in the development of mathematics, as well as in the natural and social sciences. The work of Stephen Wolfram over the last several decades has been a salient part in this phenomenon helping founding the field of Complex Systems, with many of his constructs and ideas incorporated in his book A New Kind of Science (ANKS) becoming part of the scientific discourse and general academic knowledge--from the now established Elementary Cellular Automata to the unconventional concept of mining the Computational Universe, from today's widespread Wolfram's Behavioural Classification to his principles of Irreducibility and Computational Equivalence.

This volume, with a Foreword by Gregory Chaitin and an Afterword by Cris Calude, covers these and other topics related to or motivated by Wolfram's seminal ideas, reporting on research undertaken in the decade following the publication of Wolfram's NKS book. Featuring 39 authors, its 23 contributions are organized into seven parts:

Systems Based on Numbers & Simple Programs

The Behavior of Systems & the Notion of Computation

"I found this volume fascinating in its efforts to flesh out the computational implications for biology more generally."

"I believe that this book will be an inspiration for future work in interdisciplinary research at the intersection of computer science, natural and social sciences."