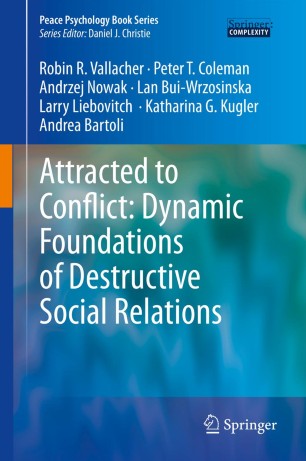 Conflict is inherent in virtually every aspect of human relations, from sport to parliamentary democracy, from fashion in the arts to paradigmatic challenges in the sciences, and from economic activity to intimate relationships.  Yet, it can become among the most serious social problems humans face when it loses its constructive features and becomes protracted over time with no obvious means of resolution.

This book addresses the subject of intractable social conflict from a new vantage point.  Here, these types of conflict represent self-organizing phenomena, emerging quite naturally from the ongoing dynamics in human interaction at any scale—from the interpersonal to the international.  Using the universal language and computational framework of nonlinear dynamical systems theory in combination with recent insights from social psychology, intractable conflict is understood as a system locked in special attractor states that constrain the thoughts and actions of the parties to the conflict.  The emergence and maintenance of attractors for conflict can be described by means of formal models that incorporate the results of computer simulations, experiments, field research, and archival analyses.  Multi-disciplinary research reflecting these approaches provides encouraging support for the dynamical systems perspective.

Importantly, this text presents new views on conflict resolution.  In contrast to traditional approaches that tend to focus on basic, short-lived cause-effect relations, the dynamical perspective emphasizes the temporal patterns and potential for emergence in destructive relations.  Attractor deconstruction entails restoring complexity to a conflict scenario by isolating elements or changing the feedback loops among them.  The creation of a latent attractor trades on the tendency toward multi-stability in dynamical systems and entails the consolidation of incongruent (positive) elements into a coherent structure.  In the bifurcation scenario, factors are identified that can change the number and types of attractors in a conflict scenario.  The implementation of these strategies may hold the key to unlocking intractable conflict, creating the potential for constructive social relations.

“This book is very well worth reading. The premise of crafting unifying paradigms beyond the realm of middle-range studies is certainly fascinating. Adding original insights from social psychology and the complexity sciences, this book is a welcome contribution to this overarching research program.” (Sebastian Schutte, Journal of Artificial Societies and Social Simulation, Vol. 17 (1), 2014)
Buy options