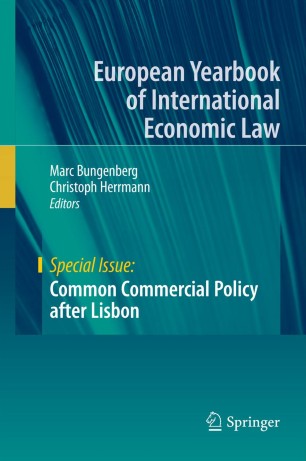 Since the beginning of the process of European integration the EU Common Commercial Policy (CCP) has been one of the most dynamic political fields. The EU has achieved a leading role among the economic superpowers and is regarded as a single economic area in which the EU speaks also on behalf of its Member States for most aspects of external economic politics. This volume analyzes the implications of the Treaty of Lisbon for the Common Commercial Policy of the EU. The Lisbon Treaty has declared all matters concerning external commercial policy as exclusive competences of the EU. Which consequences does this have for the Member States of the EU? With regard to institutional modifications, the Lisbon Treaty has significantly strengthened the role of the European Parliament and has substantially changed the role of the ‘High Representative of the Union for Foreign Affairs and Security Policy’ (HR). Further topics of this volume are the new normative framework of the CCP, inter alia the linkage of the CCP to the general objectives for the EU’s external actions and its dependence on secondary legislation, as well as investment policy now being part of the CCP.