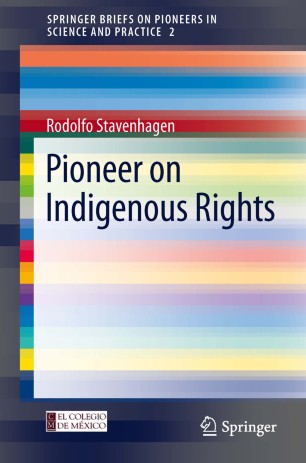 Part of the SpringerBriefs on Pioneers in Science and Practice book series (BRIEFSPIONEER, volume 2)

On the occasion of the 80th birthday of Rodolfo Stavenhagen, a distinguished Mexican sociologist and professor emeritus of El Colegio de Mexico, Úrsula Oswald Spring (UNAM/CRIM, Mexico) introduces him as a Pioneer on Indigenous Rights due to his research on human rights issues, especially when he served as United Nations Special Rapporteur on the rights of indigenous peoples. First, in a retrospective Stavenhagen reviews his scientific and political work for the rights of indigenous peoples. Seven of his classic texts address Seven Fallacies about Latin America (1965); Decolonializing Applied Social Sciences (1971); Ethnodevelopment: A Neglected Dimension in Development Thinking (1986); Human Rights and Wrongs: A Place for Anthropologists? (1998); Indigenous Peoples and the State in Latin America: An Ongoing Debate (2000); Building Intercultural Citizenship through Education: A Human Rights Approach (2006); and Making the Declaration Work (2006). This volume discusses the emergence of indigenous peoples as new social and political actors at the national level in numerous countries, as well as on the international scene. This book introduces a trilogy of Briefs on Rodolfo Stavenhagen published in the same series Pioneers in Science and Practice.