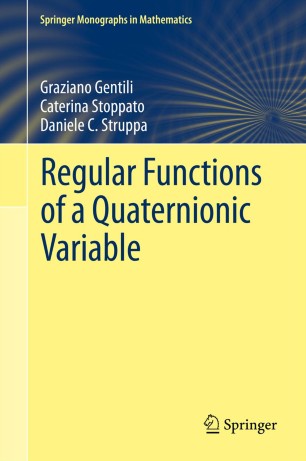 Regular Functions of a Quaternionic Variable

The theory of slice regular functions over quaternions is the central subject of the present volume. This recent theory has expanded rapidly, producing a variety of new results that have caught the attention of the international research community. At the same time, the theory has already developed sturdy foundations. The richness of the theory of the holomorphic functions of one complex variable and its wide variety of applications are a strong motivation for the study of its analogs in higher dimensions. In this respect, the four-dimensional case is particularly interesting due to its relevance in physics and its algebraic properties, as the quaternion forms the only associative real division algebra with a finite dimension n>2. Among other interesting function theories introduced in the quaternionic setting, that of (slice) regular functions shows particularly appealing features. For instance, this class of functions naturally includes polynomials and power series. The zero set of a slice regular function has an interesting structure, strictly linked to a multiplicative operation, and it allows the study of singularities. Integral representation formulas enrich the theory and they are a fundamental tool for one of the applications, the construction of a noncommutative functional calculus.

The volume presents a state-of-the-art survey of the theory and a brief overview of its generalizations and applications. It is intended for graduate students and researchers in complex or hypercomplex analysis and geometry, function theory, and functional analysis in general. ​