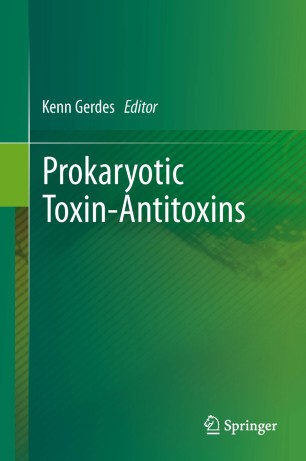 Prokaryotic Toxins – Antitoxins presents the first comprehensive overview of an exciting and rapidly expanding research field. Toxin – antitoxin (TA) genes were first identified on plasmids almost 30 years ago. Since then it has become evident that TA genes are highly abundant on both plasmids and chromosomes belonging to the bacterial and archaeal domains. TA genes come in three variants, depending on how the antitoxin works. In the most common TA genes, called type II TA loci, the antitoxins are proteins that combine with and neutralize the toxins. Even though the toxins come from at least 10 evolutionary independent gene families they inhibit translation and induce dormancy and persistence. The toxins inhibit translation using different molecular mechanisms. For example, the most common toxin family, called VapC (Virulence-associated protein), inhibits translation by cleaving initiator tRNA. Another common toxin family, called RelE, inhibits translation by cleaving messenger RNA  positioned at the ribosome. Recent database mining revealed more than 10,000 such TA loci in »700 prokaryotic organisms. Remarkably, in some species, TA genes have undergone dramatic expansions. For example, the highly persistent major human pathogen Mycobacterium tuberculosis has almost 100 TA loci belonging to different gene families, whereas its close relative M. leprae has none. All sequenced archaeal genomes to date have at least two TA loci and the thermophilic archaeon Sulfolobus tokodaii has »40 TA loci. The considerable expansion of the TA genes is a biological mystery but may be related to the biological function(s) of TA genes, a topic that is still hotly debated. The genetic analysis of TA genes is hampered by the multitude of seemingly similar genes within one particular genome. However, recent analysis with the model organism E. coli revealed a breakthrough indicating that TA genes contribute cumulatively to bacterial persistence. All known free-living bacteria that form persisters, cells that survive antibiotics and other environmental threats, contain TA genes. Together, these groundbreaking observations have raised the exciting possibility that TA genes are involved in the persistence of many bacteria, including major human pathogens such as M. tuberculosis. The expanding TA field has an exciting future ahead of it.