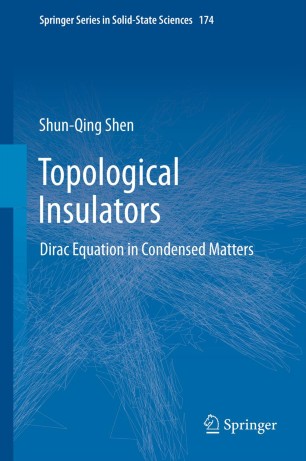 This book is intended for researchers and graduate students working in the field of topological insulators and related areas.

Shun-Qing Shen is a Professor at the Department of Physics, the University of Hong Kong, China.

Professor Shun-Qing Shen, an expert in the field of condensed matter physics, is distinguished for his research works on spintronics of semiconductors, quantum magnetism and orbital physics in transition metal oxides, and novel quantum states of condensed matters. He proposed the theory of  topological Anderson insulator, spin transverse force, resonant spin Hall effect and the theory of phase separation in colossal magnetoresistive (CMR) materials. He proved the existence of antiferromagnetic long-range order and off-diagonal long-range order in itinerant electron systems.

Professor Shun-Qing Shen has been a professor of physics at The University of Hong Kong since July 2007. Professor Shen received his BS, MS, and PhD in theoretical physics from Fudan University in Shanghai. He was a postdoctorial fellow (1992 – 1995) in China Center of Advanced Science and Technology (CCAST), Beijing, Alexander von Humboldt fellow (1995 – 1997) in Max Planck Institute for Physics of Complex Systems, Dresden, Germany, and JSPS research fellow (1997) in Tokyo Institute of Technology, Japan. In December 1997 he joined Department of Physics, The University of Hong Kong. He was awarded Croucher Senior Research Fellowship (Croucher Prize) in 2010.

“The book is devoted to the study of a large family of topological insulators and superconductors based on the solutions of the Dirac equation … . this book combines clear physical approaches and strict mathematics. It is very interesting from a methodical viewpoint for teaching the modern physics of condensed matters.” (I. A. Parinov, zbMATH, Vol. 1273, 2013)