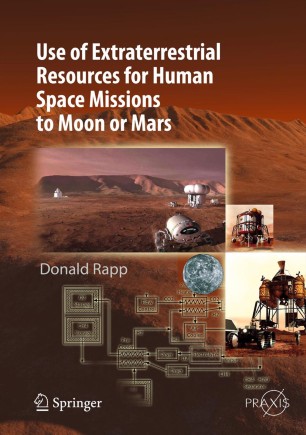 This book carries out approximate estimates of the costs of implementing ISRU on the Moon and Mars. It is found that no ISRU process on the Moon has much merit. ISRU on Mars can save a great deal of mass, but there is a significant cost in prospecting for resources and validating ISRU concepts. Mars ISRU might have merit, but not enough data are available to be certain.
In addition, this book provides a detailed review of various ISRU technologies. This includes three approaches for Mars ISRU based on processing only the atmosphere: solid oxide electrolysis, reverse water gas shift reaction (RWGS), and absorbing water vapor directly from the atmosphere. It is not clear that any of these technologies are viable although the RWGS seems to have the best chance. An approach for combining hydrogen with the atmospheric resource is chemically very viable, but hydrogen is needed on Mars. This can be approached by bringing hydrogen from Earth or obtaining water from near-surface water deposits in the soil. Bringing hydrogen from Earth is problematic, so mining the regolith to obtain water seems to be the only way to go. This will require a sizable campaign to locate and validate useable water resources. Technologies for lunar ISRU are also reviewed, even though none of them provide significant benefits to near-term lunar missions. These include oxygen from lunar regolith, solar wind volatiles from regolith, and extraction of polar ice from permanently shaded craters.

Donald Rapp was manager of the Mars Exploration Technology Program at JPL for a period, and he was manager of the In Situ Propellant Production (ISPP) task in this Program. He wrote a landmark report on converting Mars resources into usable propellants for return to Earth. He wrote the Mars Technology Program Plan in 2001.
During the period 2001-2002, he played an important role in JPL efforts in developing concepts for utilization of extraterrestrial resources in Mars missions. In 2002 he wrote the NASA Office of Space Science Technology Blueprint for Harley Thronson, NASA Technology Director, a 100-page assessment of technology needs and capabilities for future missions.
In the period 2003-2006, he prepared a revised and expanded version of the Technology Blueprint for Harley Thronson at NASA HQ. In 2004, he was Proposal Manager for a proposal for a ground-penetrating radar experiment for the Mars Science Laboratory.
In the period 2004-2006, he concentrated on mission design for Mars and lunar human missions. This work led to his writing the book Human Missions to Mars that was published by Praxis/Springer in 2007. This is a major work, comprising 520 pages with over 200 figures. It includes a chapter on in situ resource utilization (ISRU) on Mars.
He was the lead person at JPL for ISRU technology for several decades. In this role, he carried out research and analysis leading to a number or reports and publications through the 1980s, 1990s and into the 2000s.