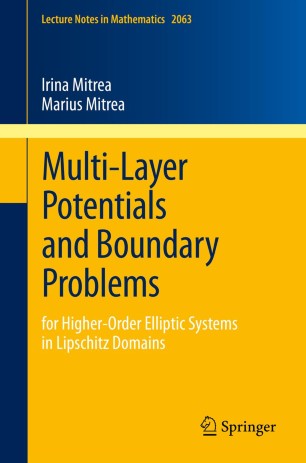 Many phenomena in engineering and mathematical physics can be modeled by means of boundary value problems for a certain elliptic differential operator in a given domain. When the differential operator under discussion is of second order a variety of tools are available for dealing with such problems, including boundary integral methods, variational methods, harmonic measure techniques, and methods based on classical harmonic analysis. When the differential operator is of higher-order (as is the case, e.g., with anisotropic plate bending when one deals with a fourth order operator) only a few options could be successfully implemented. In the 1970s Alberto Calderón, one of the founders of the modern theory of Singular Integral Operators, advocated the use of layer potentials for the treatment of higher-order elliptic boundary value problems. The present monograph represents the first systematic treatment based on this approach.