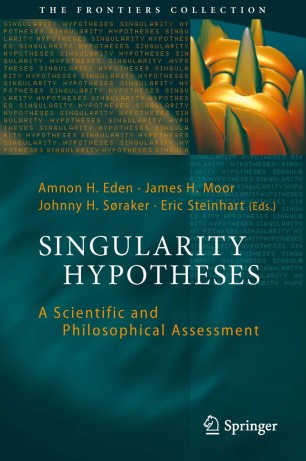 A Scientific and Philosophical Assessment

Singularity Hypotheses: A Scientific and Philosophical Assessment offers authoritative, jargon-free essays and critical commentaries on accelerating technological progress and the notion of technological singularity. It focuses on conjectures about the intelligence explosion, transhumanism, and whole brain emulation. Recent years have seen a plethora of forecasts about the profound, disruptive impact that is likely to result from further progress in these areas. Many commentators however doubt the scientific rigor of these forecasts, rejecting them as speculative and unfounded. We therefore invited prominent computer scientists, physicists, philosophers, biologists, economists and other thinkers to assess the singularity hypotheses. Their contributions go beyond speculation, providing deep insights into the main issues and a balanced picture of the debate.

"The book presents a clear, balanced, critical study and discussion around one of the most neglected hypotheses of our recent time - the Singularity Hypothesis. The book focuses on the technological singularity, notably the intelligence explosion and the possibility of the super-intelligence and its consequences. ... The book poses a challenge and opens the way for future research." (Ilya Levin, Head of Mathematics, Science and Technology Education Department, School of Education, Tel-Aviv University, June 2013)

"A 'who’s who' of thinking on the Singularity, the volume is notable for having both leading thinkers and critics of the visions behind what may (or may not) be one of the most important events to come in all of human history." (P.W. Singer, author of the book Wired for War: The Robotics Revolution and Conflict in the 21st Century and Director, Center for 21st Century Security and Intelligence at Brookings, June 2013)

"Eden and colleagues have produced a remarkably thorough survey of contemporary expert thinking concerning the technological singularity. It is particularly impressive that there is a whole section, rather than just a token chapter, dedicated to skepticism about its occurrence. The inclusion of short responses to most chapters is also highly valuable. The only issue that I was sorry to see omitted - and this may well be because too little can yet be said about it - is whether recursive self-improvement of the kind probably required for the singularity may be provable impossible, in the same sort of sense as the "halting problem". All in all, this volume will provide a wide range of audiences with an extremely timely and high-quality account of what we think, know and do not know about what could be the most transformative event in human history." (Aubrey de Grey, gerontologist, Chief Science Officer, SENS Research Foundation, May 2013)

"'Singularity Hypotheses' can be seen as a major sign of the impending birth of a rigorous new field of studies, perhaps known as 'Singularity Studies'. ... the editors are to be congratulated on insisting that the Technology Singularity is a topic well worth analysis, and for enabling this ground-breaking round of discussion to take place. Even where I disagreed with individual viewpoints expressed - which was often - I found myself confronted by useful new thinking models or thought-provoking examples. The diverse essays in 'Singularity Hypotheses' can provide the beginning of serious classification of the issues and risks which will increasingly occupy the public attention ... . The editors of 'Singularity Hypotheses' have shown real leadership in addressing this subject, despite its present-day immaturity." (David W. Wood: Chair, London Futurists; co-founder and Executive VP, Symbian; Principal, Delta Wisdom, May 2013)

"Singularity hypotheses argue that human society is close to a transformative moment in which Artificial Intelligence or biological enhancements will change, and perhaps destroy what we have  traditionally understood by ‘humanity’. This volume offers a wide range of essays that explicate, defend and criticize a range of singularity theories.  The best introduction I know of to some profound debates about our future as a species." (David Christian, author of "Maps of Time: An Introduction to Big History", Macquarie University, Sydney, and WCU Professor, Ewha Womans University, Seoul, May 2013)

"There's so much hype and skepticism around the technological singularity that it's difficult to find a balanced discussion. But this volume has done just that nicely. Not only do the essays present the case for and against the singularity, as well as its implications, but each essay is followed by a short critical response to keep the discussion honest at each stop. For anyone interested in the technological future, this is a unique and much-needed contribution to the field."(Dr. Patrick Lin, California Polytechnic State University, April 2013)

"Riveting. This is one of the more balanced and insightful commentaries on the pragmatics and the possibilities of the continuing co-evolution of computing and humanity." (Grady Booch, Chief Scientist for Software Engineering at IBM Research, March 2013)

"Finally the Technological Singularity has become a socially, philosophically, and scientifically acceptable topic regarded worthy of investigation. ... This book seems very timely, given the largest research excellence award in history (1 billion Euro) just went to developing the most detailed simulation of the human brain." (Marcus Hutter, Professor in the RSCS at the Australian National University in Canberra, Australia, March 2013)